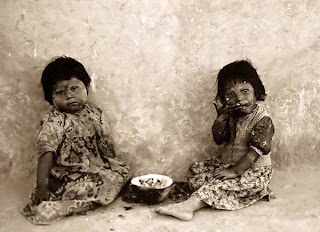 Sam Harris and the End to Religion
Dennis sent me this link to this short CNN article concerning atheist author Sam Harris. Titled, “Why we should ditch religion”, the article also includes a recent interview with him and outlines some of his basic beliefs. I wikipedia'd the guy and found out that Harris believes in discourse that he calls “conversational intolerance”. He doesn't believe tolerance and letting people believe whatever they want to believe is the solution to coexisting in a pluralistic world. Though I am a Bible-believing Christian and I have little to agree with him, I do agree on this point. I believe that blind tolerance is not sustainable in a society of such diverse beliefs; it is neither sustainable nor logically possible. So I credit him in his boldness in claiming that all religious people are wrong in their beliefs

Harris' basic claim in the interview is that religion is not only obsolete, but its continuing to linger on in the new secular society is actually harmful and dangerous. He believes that all the energy spent on arguing over gay marriage is taking away attention from real serious issues concerning human life. “We should be talking about real problems, like nuclear proliferation and genocide and poverty and the crisis in education....These are issues which tremendous swings in human well-being depend on. And it's not at the center of our moral concern“ According to Harris, it's not at the center of our concern because we are arguing too much over peripheral religious issues. Because we are so focused on meaningless religious issues like what God wants and what's going to happen in the afterlife, we “talk about things like gay marriage as if it's the greatest problem of the 21st century.” And while men in positions of power debate endlessly on those issues, people are suffering.

As a morally-conservative, Bible-believing, Reformed evangelical Christian, I reject his claim that issues like gay marriage and abortion are completely irrelevant to human well-being. But as a born-and-raised liberally-educated New Yorker (and to some extent, a halfway decent human being), the recesses of my heart resonate deeply with his concern. His rejection of religion arises out of a deep compassion and concern for people who are truly in need. My heart breaks for the injustices that are going on in the world. From the homeless guy named John who hangs out around GracePoint to the women in all parts of the world who are kidnapped, forcefully injected with addictive drugs to weaken their will and make them dependent, and made to work as a prostitute for the rest of their lives; the other day I broke into tears at my desk for a good ten minutes just reading about it. It's horror and injustice of cosmically heartbreaking proportions.

And that is no hyperbole. These things break God's heart.

And for these reasons, I am often to tempted to say, “What the hell. Why are we focusing so much on these moral issues that don't even hurt anyone at the cost of compassion and mercy ministry and fighting social injustice?” And it still makes me sick to think of how much Christians squabble over meaningless things when people are dying and starving, when the economy worsens in our own country and the sins of the private sector screw over so many innocent men and women. When Christian men, in the name of God, stand up for big corporations that use child slaves and destroy ecosystems. And you can ask Euge or Owen 'cause I've talked with them about these things; this issue sickens me and tears me apart. How is a Christian supposed to be obedient to God in our world?

These questions fracture my soul. It's the natural reaction and temptation of any half-decent human being to say, “Let's stop talking about gay marriage and issues that aren't even harming anyone and start loving like Jesus did” “Let's stop wasting time with religion. People are dying.” “Let's drop these seemingly petty issues and help those who are truly in need”. The Levite passed over his neighbor because he was more concerned for his cleanness than he was for the life of a human being. Let's be the good Samaritan. You can be a good Samaritan even if you don't believe in God.

But what I've been realizing more and more is, it doesn't work like that. We cannot do that. We cannot give up the gospel, our only hope for true restoration and peace, for a temporary solution. We must still fight for Christianity, just as we fight for the well-being of our brothers and sisters. Why do we love them and care for them? Because God loved them and cared for them. Because Jesus loved them and had compassion for them.

If we give up fighting for Christ in order to bring short term relief to the suffering of the world, we are selling out any hope of a permanent end to suffering. It would be like cutting your finger and then selling your liver for a band-aid. Who does that? We cannot stop fighting. We cannot surrender God's truth in order to save a few people, and in doing so, damn those people, damn ourselves, and damn our posterity.

I confess, I have hatred for my brothers and sisters. Through my upbringing, it's natural to hate Southern Baptist Christians. I hate the Christian right. I hate James Dobson and George W. Bush and Pat Robertson and Gary North. It's a sin and it's something I have to constantly repent of and deal with in my heart. I still cannot, for the life of me, align myself with people like them. But this I do realize, that if it weren't for these men who are fighting so hard for Christian values and dying every day (at least in their public image) in order to uphold the gospel, Christianity would have fallen long ago in my country. If they stopped doing what they were doing and without regard to who hates them, our nation would have fallen completely over to Satan.

The Gospel and the End to Suffering
Mr. Harris may not realize that in his reasoning for abolishing religion he is making a value judgment that all forms of Christianity (minus the heretical ones) and virtually every monotheistic religion affirms at the core of their beliefs. Mr. Harris is saying that, human life is of value and therefore we should fight for it. Another thing Mr. Harris may not realize is that, as an atheist, he has no grounds for making this value judgment. All value judgments by definition carry with it the force of an imperative. An imperative is an “ought”; it is a claim that one SHOULD or MUST live a certain way. In this case, Mr. Harris is saying we value human life therefore we SHOULD be caring for it. But if he doesn't believe in God he has no grounds for telling anybody how they SHOULD live. In a world lacking a God or transcendent being, all we have are opinions.

The ironic thing is, in Christianity (and most monotheistic religions for that matter), there is a ground for valuing human life. As Christians, we believe that everyone is made in the image of God, and therefore all lives are of value. Our beliefs give meaning to our compassionate works. Our religion gives substance to that which we believe in our hearts. Without God, all Sam Harris has is a firm conviction in his heart that humans are valuable, but no way to substantiate that conviction.

In the gospel, we have more weapons for bringing peace and justice to all of humanity than any compassionate secular atheist. For one thing, we have a reason. God sees human life as important. It has value and dignity. Therefore we should fight against injustice. We should fight against the dehumanizing of women. We should fight against poverty and hunger. But more than that. We have hope. What good is it to fight if there's no guarantee of victory? But in the gospel, we have an assurance that one day, what Christ did will bring an end to all that is evil and unnatural in the world. In the gospel, we have a God who says that he will, “wipe every tear from their eyes. There will be no more death or mourning or crying or pain, for the old order of things has passed away.” In the gospel we have a God who will make everything new and gave us the assurance and receipt that it will come to pass through the resurrection.

Mr. Harris, you know in your heart of hearts what the right thing to do is. But without Jesus Christ, you have no reason to do it and no hope for every achieving its completion.

Jesus Anointed at Bethany
In Mark 14, a woman came to Jesus with a bottle of very expensive perfume, worth more than a year's wages. In an extravagant show of love and sacrifice, she poured the whole dang thing over Jesus' feet and washed it with her hair. Some of the social justice advocates among Jesus' disciples were outraged. “That perfume could have been sold and the money given to the poor!” What is with this wastefulness, this callous lack of concern for the suffering?

I finally understand now why Jesus rebuked his disciples and said to leave her alone. “The poor you will always have with you. But you will not always have me” That woman out of all the people understood Jesus' true worth. She alone realized that Jesus was the end to the poor. He was the end to suffering to evil and persecution and injustice. So by making this show of sacrifice, a show that surely made the practical cringe at the thought of the wastefulness, the woman demonstrated that she love the poor. She loved the poor because she loved Christ, the solution to the poor.

The downtrodden we will always have with us. If we sell out our savior Jesus Christ, then we will sell out the final end to suffering.
Posted by Daniel Shih at 2:33 AM